Art Hotel Commercianti's How to reach us

Visit our Hotel in Bologna

The Art Hotel Commercianti, our 4-star boutique historic hotel in the centre of Bologna, has an unbeatable location in the shadow of the Basilica di San Petronio, on Piazza Maggiore, which makes it the ideal accommodation for your cultural and leisure trips to Bologna. Our hotel lies at walking distance to the most important museums, theatres and shopping centres of the city, and close to San Petronio and the Palazzo del Podestà. Besides, our hotel is located 150 metres away from a bus stop, 1 km away from the train station and just 7 km away from Bologna airport.

IMPORTANT NOTICE: In Bologna, like a lot of European cities, there are several areas partially or totally forbidden to traffic. In order to avoid to incur in penalties during the departure and the arrival at our hotel, you must follow the authorised itinerary that we have prepared for you making attention not to violate traffic laws. If you have a navigation system, we suggest you to enter Via Alfredo Testoni n. 2, 40100 Bologna. This is a street nearby our hotels, access point to the Limited Traffic Zone, better recognized by the navigator system rather than our proper address which is on a pedestrian area. From Via Alfredo Testoni we kindly ask you to follow the instructions in 'How to reach us'.

The Art Hotel Commercianti, our 4-star boutique historic hotel in the centre of Bologna, has an unbeatable location in the shadow of the Basilica di San Petronio, on Piazza Maggiore. 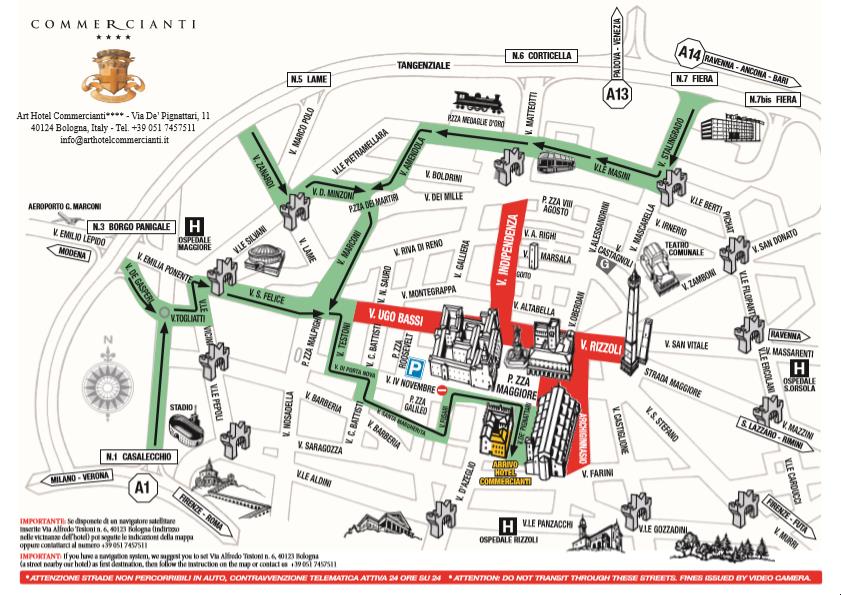